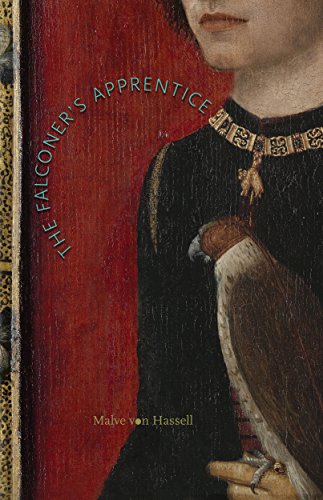 Andreas, an adventuresome 15-year old orphan, embarks on a precipitous flight across Europe to rescue the falcon Adela.

A crotchety falconer, a secretive trader and his feisty daughter, a mysterious hermit, a young king in prison, an aging emperor, and an irascible Arab physician are among the principal characters in this action/adventure novel, set in the 13th century.

Written for readers age twelve and above, this coming-of-age story conveys life in medieval Europe, with bedbugs next to silver chalices, food ranging from the moldy to the sublime, and intellectual sophistication side by side with rank superstitions.

Original poetry by King Enzio, imprisoned in Bologna, and writings about falconry by Emperor Frederick II of Hohenstaufen are incorporated into the novel.

The eight parts of the novel reflect the eight octagonal towers of the Castel del Monte, a critical turning point in the protagonist’s life.

Alina: A Song for the Telling and The Amber Crane by Malve von Hassell are also on Whizbuzz Books.