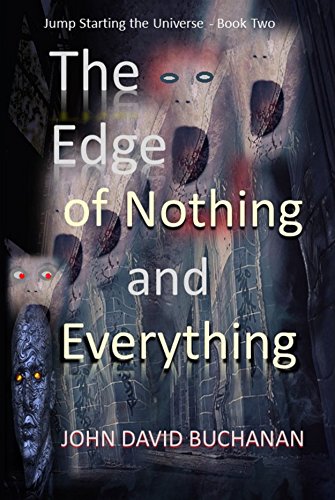 Hang on for a wild ride. The Edge of Nothing and Everything – book two of the Jump Starting the Universe Series.

After witnessing an assassination, they scrambled into the Nomad and Jumped just in time to avoid a hit-man. Blackie hoped things would be more normal when they arrived on Gafcon-49. It wasn’t long before that hope was completely dismissed. After visiting the lake with Mark, Nita, Blackie, Joules and Amelia, Wayne drove his 1957 Nomad station wagon over a cliff and into the greenish tinted mixing zone. When it separated Amelia frantically pushed the red button on the front of the Jump Starter. A golden ring instantly formed near the front bumper of the Nomad and glided by with a whooshing sound. The cross over had deposited them on Volcanon. A gigantic volcano in the distance spewed poisonous gas and lava, and chunks of rock the size of large houses.

Wayne sat with his hands on the steering wheel and noticed the sides of the gorge were closing in quickly. Expecting to hit the bottom at any moment he closed his eyes as another ring whooshed by and the Nomad was bathed in a white haze punctuated by intermittent silver flashes. Someone nervously hummed a song as another ring flew though the haze just as the Nomad, along with Amelia, Mark, Blackie, Nita, Joules, and Wayne, and a large amount of band equipment vanished into thin air.

Amelia was still screaming when the Nomad dropped out of the jump onto a desert plain and plowed to a stop in the deep yellow sand. They were bewildered by what had just happened. Two large moons hovered near the horizon in front of them as the sun went down on the mountains behind. Mesmerized by the scene before them, they had no idea what to do, where they were, or how to get back to Gafcon-49.

Unknown to them, a centuries old dispute raged throughout this universe and before long they not only knew about it, they were smack dab in the middle of it. Every ounce of intelligence and luck would be needed if they were to survive. Wayne was sure something weird was about to happen – again – and it did. They would never have guessed they would soon have the most unlikely of traveling companions.

The Edge of Nothing and Everything : John David Buchanan