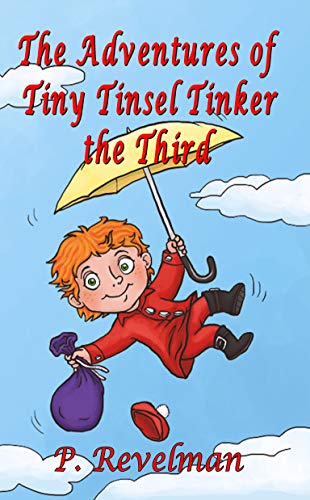 It is the middle of the night, and mysteriously, Tiny Tinsel Tinker the Third finds himself sitting at the end of young Annastasia’s bed. He meets her brother Cornelius and their puppy Blackie.

The children are delighted to greet this little man but want to know where he came from. Tinsel points to the small drawstring bag he has looped about his neck. This seems most unlikely to the children and so Tinsel tells them his story.

He tells how he was washed over a bridge in a terrible storm and became separated from his parents and younger brother. Alone in the dark floating on a log, he heard a cry for help. A flash of lightning revealed a Blue rabbit in the dangerous waters and Tinsel was able to rescue him.

By way of thanks, Blue rabbit gives Tinsel a small, purple drawstring bag, which he says will help Tinsel find his family. Somehow Tinsel is able to climb inside the bag even though it is much smaller than he is. Once snug inside he falls asleep, not knowing where he will wake the next morning.

He delights his new-found friends to all sorts of surprises, invisible cookies, pots of brilliant flowers, a shower of stars, beautiful butterflies all from inside Purple.

Tinsel’s amazing journey to find his family continues taking him on new adventures. In the markets of Tralah, he buys a coat made of seaweed, he meets Franseca a brave sailor girl, the only person in the village brave enough to sail him over the Great Ocean. He climbs the North Mountain and catches a ride across to deep valley to the top of the South mountain on the back of a great Eagle. Tinsel climbs down the mountain on the ‘tingling steps’ and meets the Ben family in the Valley of dreams.

The Adventures of Tiny Tinsel Tinker the Third : Peter Revelman