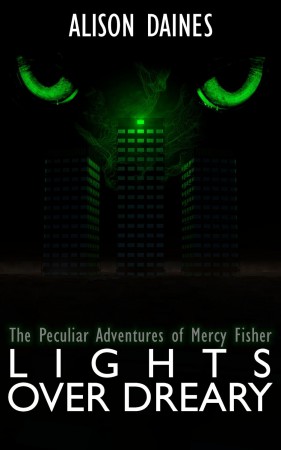 Lights Over Dreary – The Peculiar Adventures Of Mercy Fisher

Life as Mercy Fisher knows it is about to romp to an end.

All Mercy wishes for is a little excitement, but as a bored checkout operator for a local supermarket, the closest she gets to any is the occasional smashed wine bottle or bag of exploding pasta.

Her life takes a turn for the weird and dangerous though when an alien prince, on the run from another dimension, arrives seeking protection from giant space fleas and enemy bounty hunters.

With the prince indignantly trapped in the body of a domestic cat, hilarity ensues as Mercy struggles against the machinations of an evil corporation, puzzles over her past and tries not to throttle her new feline companion for being obnoxious – all the while doubting her own sanity and coming to terms with a set of annoying new abilities.

Assassins, killer robots, squishy invisible monsters and kick-ass action abound. Can Mercy save the town from being vaporized by Agents from beyond? Or will her quest for normal un-alien-tampered hair and a boyfriend come first?