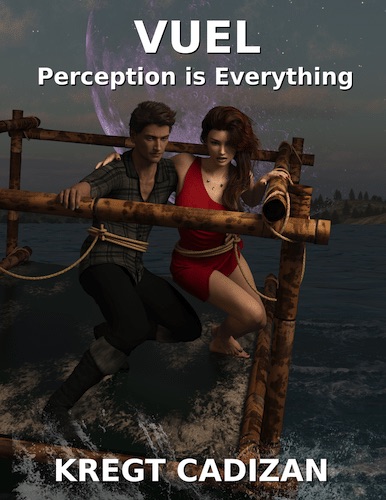 They all remembered leaving the Cactus Bar that night and walking across the parking lot. They are all sure that was their last memory of Earth.

Their next memory was of walking out of a spaceship onto the meadows of Vul. They will not forget the first time they looked up to see a planet filling the sky.

Ranger walked out of that spaceship with the first group of Humans, then watched as other groups were loaded into vehicles and taken away. Alecia and Suzann were difficult to distinguish from other girls, but he thought he recognized them by their movements. He wasn’t sure of anything, really, except that there was another planet filling the sky, and this place was definitely not Earth.

Alecia and Suzann are taken to a mountain village and trained to be the charismatic vuelessas that guide vuel. Suzann will initially reject the training and learn hard lessons about vuel.

Ranger fares no better as he is abducted from Vul and sent to the twin planet, Govul, where work crews do not survive for long.

The Vuelans of Vul believe that Earth Humans are primitive beings, brought from a faraway land where they lived in the wild, and must be taught the Vuelan lengua as well as basic cleanliness.

These stories are received on Earth telepathically from each character. Occasionally, their stories converge.

In Vuel, perception is everything.

The first book of the “Vuel” series.