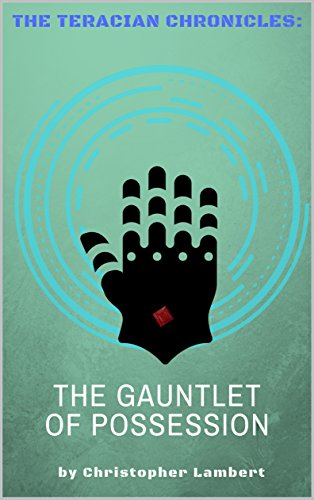 The Teracian Chronicles: The Gauntlet of Possession

On the world of Teracia, a small and peaceful alien civilization coexists with the last remaining population of humanity after a devastating and costly war on Earth. Orbiting the planet, the people of the once proud Septune Station attempt to rebuild and regain their place in the universe. The leader of the Septunians cultivates a disastrous plan to once again establish control. Little of humanity is left in the cybernetic citizens as they reach the point of no return in their goals of complete physical perfection, but at what price?

Hidden deep in a spiritual temple, a locked away corruption desires to be set free. With no way to react, a swift turn of events sends Allen Schraider and his friends into a conflict they cannot escape and an alternate Earth they cannot return to. William Dante, a well-loved and loyal friend is torn away from them and seemingly left for ruin when his body is taken over by a chaotic force known as Dazshra. To survive they must form alliances and question the very reason for their presence. Hopeless odds pit humanity against forces it cannot comprehend and tremendous power at the very center of the conflict, the Quantum Infinity. Able to create and form matter, it controls the very fabric of reality.

Allen and his friends are forced to act to prevent William’s corruption and the destruction of everything they grow to cherish.