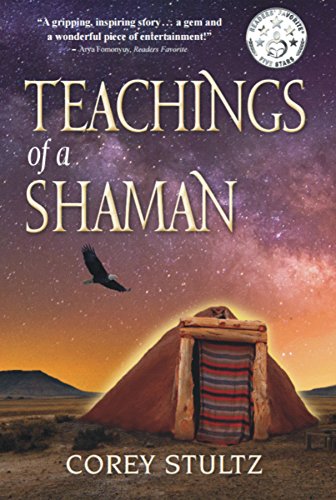 Teachings of a Shaman: A Story of Deliverance & Redemption

Teachings of a Shaman is a heartwarming story about a troubled youth who’s taken in and nurtured back to health by an elderly Navajo medicine-man; it’s a coming-of-age story chock-full of humor, adventure, and magical realism.

When Dwayne Rader gets caught stealing to support his heroin habit, a judge mandates he complete a drug treatment program in Arizona, but on his second day there, he’s accidentally knocked unconscious and abandoned by his group in the middle of the desert!

When he comes to, sheer terror floods through his body! He has no food, no water, and no idea where he is. Although his demise seems inevitable, he’s rescued in the nick of time by a Navajo shaman named Rising Water. But when Rising Water asks what his name is, he doesn’t know; he can’t remember!

Sympathetic of Dwayne’s dilemma, Rising Water insists he live with him until his memory returns. The pair of them bond almost immediately, and soon, a father-son relationship develops. In his new role, Rising Water proudly mentors Dwayne, and Dwayne absorbs his teachings like a sponge!

Ultimately, he proves to be such an amazing prodigy that Rising Water makes him a shaman, and bestows upon him the unfathomable powers that accompany the all-important title — powers that he must master very quickly! For there’s no way anyone could’ve anticipated the life-or-death situation that’s awaiting him just around the corner!

* Teachings of a Shaman is a proud recipient of the renowned READERS CHOICE FIVE STAR AWARD! Buy your copy now!

Teachings of a Shaman : Corey Stultz