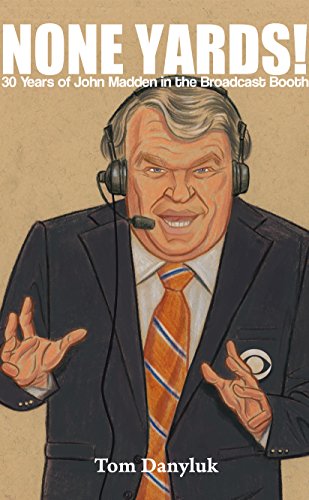 30 Years of John Madden in the Broadcast Booth

John Madden, the churning, eruptive Oakland Raiders head coach, quit the sideline for good in early 1979. By the winter of ’81, he had become pro football’s premier TV analyst in a dazzling, rocketing shot to the top. For nearly three decades, he remained there.

Former NBC announcer Charlie Jones once said, “John Madden is one of those people who has IT, whatever IT is. That extra star-quality within their profession. You know it when you see it. Tom Cruise has IT. John Elway has IT. So does John Madden.”

For Madden, IT was the ability to deliver pro football to his audience in a widely consumable style. From the CEO to the car mechanic, his message was embraced. To the complex, he injected simplicity; to the obvious, he identified technique; to the combatants in uniform, he added warmth and levity.

This book, however, is no treatise on the Madden style, or some draining dissection of his popularity. It’s simply a collection of quotes, the things he said along the way. His words and critiques and opinions, from the rise of the Walsh 49ers through the Aikman-Irvin-Smith Cowboys to the brilliance of Brady/Manning. Thirty years of oral history.

It’s Madden on football, as he witnessed it live.