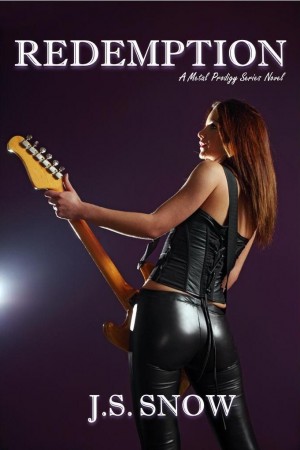 A three year old child left for dead by the mafia in a nondescript cardboard box left next to a blue dumpster in a Philadelphia alley is rescued by a Nun and Priest. The Nun later resigns her calling to become the child’s adopted mother and discovers through music she can get this child to come out of her shell.

Fast forward nineteen years later and this same child who turns out to be a musical prodigy turns down a position with the New York Philharmonic Orchestra to pursue her dream of being a Heavy Metal music legendary guitarist.

Doing a friend a favor by filling in on lead guitar one night in a New York club she is discovered by the world famous Heavy Metal group Hells Redemption who is in need of filling in the lead guitarist position since theirs fell from a cliff in Moab, Utah and shattered his playing arm. They were expecting to hear a dude melt their faces off, not a five foot five brown haired blue eyed beauty that seriously can rip it on guitar.

Question now is, can they hire a woman to fill in the role or will their desire for her overpower their need for her more on guitar?

Despite Alex’s tragic start in life, she forges ahead with her goal of becoming one of the greatest guitarists in music history.

Alex has scars of her past to deal with both physically and mentally. She denies herself the joy of finding that one true love because of these scars.

Can five very alpha males help her with coming to terms with these scars and help her accept the beauty that lies within?

This is Alex’s story. These are Alex’s choices and in the end becomes Alex’s………