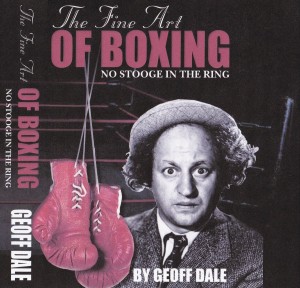 The Fine Art of Boxing – No Stooge In The Ring

For more than 80 years the world has known Larry Fine as the frizzy-haired middle man of The Three Stooges. A fall guy always on the wrong end of Moe’s infamous eye-pokes and face slaps, he’d still jump into the fray with fellow masters of mayhem – Moe, Curly and Shemp.

Few knew his hidden talents – his prowess as an amateur boxer; his untapped musical gifts as a classical violinist. He was a marvelously entertaining comic, dancer and singer but much more.

In the fictional biography The Fine Art of Boxing – No Stooge In The Ring, author Geoff Dale mixes real places and people with fantasy. Taking a ‘what if’ look at Larry’s life, he considers how the diminutive comedian might have ended up, if he’d continued his quest for boxing fame or studied to be a concert violinist.

The book covers his early years at the turn-of-the-20th-Century in South Philadelphia’s Jewish Quarter to the month before the world was engulfed by the Great Depression. Along the way, readers discover what prompted the youngster, born Louis Feinberg, to lace up the gloves.

Louis, who adopted the name Larry Fine, succeeded as an amateur fighter behind the backs of his disapproving parents, aided by prominent promoter Philip Glassman. Fighting as the feared Kid Roth, he racked up wins in ferocious style, until one fateful event stopped him dead in his tracks.

What might have happened’ if circumstances had been drastically altered. Where would Larry have headed? Could Glassman have helped his young protégé climb back through the ropes?

What was his fate?