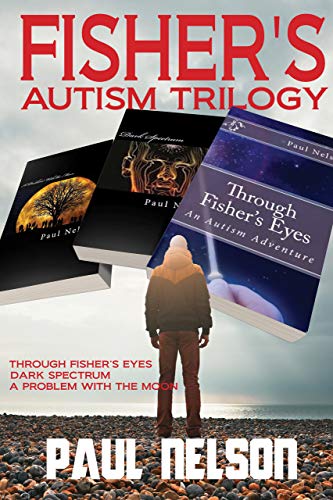 This is the entire Fisher Stevens Autism Trilogy. (Through Fisher’s Eyes, Dark Spectrum & A Problem With the Moon)

Fisher and his teenage autistic friends learn that they have amazing super powers. They use these powers in many adventures, as they encounter bullies, ghosts, demons and aliens.

THROUGH FISHER’S EYES (book 1) is told from Fisher’s point of view. He is unable to speak, so he writes his words and thoughts. He details his encounters with a mysterious friend named Michael, who teaches him to use his powers to the fullest.

DARK SPECTRUM, (book 2) involves Fisher and his friends in a great battle in Gettysburg, PA.

A PROBLEM WITH THE MOON wraps up the trilogy. Fisher’s gang teams up with aliens to try and lead Earth to a peaceful existence with other galactic communities.

Great reading for all ages, but especially for teens and young adults!