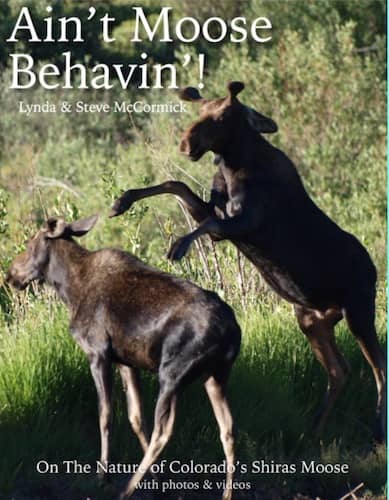 Uncovering the secret lives of moose reveals that there’s so much more to them than first meets the eye. While they seem to spend so much of their time eating and roaming, patient observation exposes many surprising aspects of their behavior. They are often clever, playful, empathetic, and affectionate—and sometimes even a little bit strange and goofy.

The Shiras form one of the least documented subspecies of moose, with little written about the particular way that these individuals live. How smart are they? Is their eyesight really poor? Do they seek the company of other moose? How dangerous are they really? What about sex?

Illustrated with 138 photos and 24 video clips, this book covers basic scientific knowledge about moose in general together with our observations on the behavior of the Shiras in particular. Along the way, we shed new light on their private lives and dispel some of the myths that surround them.

Chapters: Introduction, Mother Moose, Dining Out, Smarts, At Play, Buddies, Head to Head, In A Rut, The Shirasic Age.