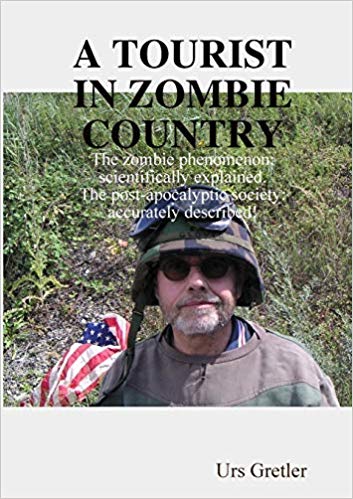 This book describes in three parts how a post-apocalyptic North America, flooded by three hundred million zombies, and a Europe on the brink of collapse would look like. At the same time, it tries to explain the zombie phenomenon in a scientific way.

At first, the scientists are clueless and pursue wrong tracks. With successive discoveries and new insights they close in on the truth, which is revealed in part three.

The story is told in the first person by an elderly Swiss tourist who finds himself stranded in Memphis after the outbreak of the pandemic and who looks at some American idiosyncrasies through European eyes. He faces several problems. Among them: How do you defend yourself against the undead and against evil men, especially if you are not physically fit? How do you survive once all the grocery stores have been looted?

The first part of the book answers these questions. After spending more than one year in America, he discovers that some European countries had managed to hang on, albeit with a decimated population, and he manages to return to Switzerland thanks to the French Navy.

In part two he returns to the wastelands of North America as advisor to a French scientific expedition. Their road trip takes them to the Gulf Coast, West Texas, Kansas and the Appalachians. They return with important information about the zombies and the few survivors in America.

In part three he returns once more, this time as advisor to a battalion-sized French army unit.

The results of these expeditions, and the research carried out in Europe, lead to the discovery of the origin of the pandemic.

Book Links
Email The Author
On Lulu
On Amazon