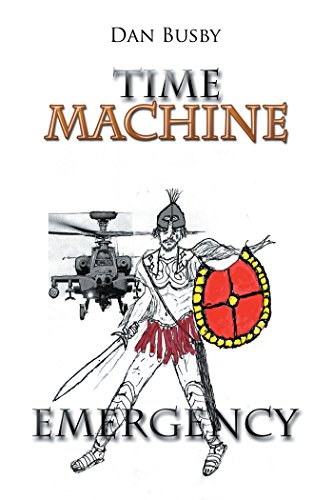 TIME MACHINE EMERGENCY is a riveting description of time travel that may well be within the realm of possibility. Just as in our current world, it was considered fantasy among scientists. But that attitude soon changed for professor Kibble and his understudy, Derek.

As a young 22 year old student, Derek sought to keep his discovery quiet in order to be absolutely certain of its scientific validity. He was soon forced to team up with the professor for financial and scientific support.

Strapped with a bureaucratic and restrictive government, the two were obliged to keep their project under the strictest secrecy. Threats of conflict were followed by outright war, which meant they had very little time to bring their discovery to fruition. Intense experimentation finally yielded rewards, although time travel tests were very risky. There was no assurance that a person would not slip into oblivion trying to transport even ten minutes into the past. They knew they had to face the danger, and they did, because nuclear destruction seemed imminent.

Jumping into the ancient past was most logical, given the impending doom lurking in the present day. But then convincing a warlike monarch of the past to go along with them was quite another matter. Using a 21st century attack helicopter proved to be the great equalizer in convincing Alexander the Great to play ball.

History was radically altered when the time travelers appeared, and also when Alexander did not die in 323BC. Great and fearsome enemies came on the scene, threatening their eradication. Use of the helicopter and modern hand guns became absolutely necessary to vanquish these foes.

Alexander steam-rolled across Europe, finally binding it under one rule. He had accomplished his dream, but now felt a void with nothing more to conquer. When Kibble and company checked the 21st century results of this campaign, they were appalled. Violence and slavery were rampant. The opposite effect had been achieved, so they went back to the drawing board.

It was determined that they now had to start a new and different campaign in 15th century America. Alexander opted to accompany them, seeing another world to conquer. Their new goal was to befriend natives and settlers alike. However, some natives were warlike, necessitating a military push. This primitive 2 year campaign from north to south was a grass roots change. Outposts were set up all across the continent, and Alexander became the benefactor of peace and prosperity.

These time travelers then checked on the 21st century again, and discovered an astounding improvement in society. When they befriended the people there, they discovered an unbelievable twist in history. A beautiful utopia was theirs for the taking, which they did not relinquish.

However, now an opportunity presented itself to rewrite their own history without the destruction of nuclear war. The team seemed compelled to prevent this horror from happening. Facing a new set of challenges, they leaped time threads to save their loved ones and world.

This is a story of bravery and determination against boundless adversity and odds. The time travelers gave up their original worlds to reshape two others, suffering privation and hardship in the process. The promise of beauty, peace, and ease made it all worthwhile.

HISTORY OF THE AUTHOR
My love for adventure started early. As a kid in Montana, I climbed the tallest trees, scaled the highest mountains. I scorned those who stayed on the paths, which was something I never did. If there was a challanging, dangerous way to get somewhere, I took it.

I wasn’t doing all this to show off. The act of jumping, soaring, or balancing gave me a feeling of freedom and exhileration that was addictive.

The call of the wild was always at my doorstep. The summer after high school graduation, some friends and I nearly pulled off a move to the forrest where we planned to build a cabin and live off the land.
Even as a married man with three children, I did things like walk across the top of swingsets. One experience in southern Utah finally taught me something about wisdom.

I shinnied up a 100 foot crevas between two rock walls. My dad, who should have known better, was right behind me. At the top, one wall gradually levelled off. I could see a hand hold, but I couldn’t reach it. I would have to leap and hope my right hand could get a grip on it.

Throwing caution to the wind, I sprang upward and laterally at the same time. Clutching onto the hand hold, I pulled my body up. My dad, seeing that he couldn’t go any further, scooted back down, and had to drive several miles around the rim to rescue me.
After this event where I risked my life in front of my wife and kids, I began drawing a line between adventure and fool hardiness.

I’m now a few years from reaching the end of my career as a registered nurse, but the thrill of high drama still burns within me. The only difference is that it now flows through the end of my pen.

If you’ve ever dreamed of going back in time to change your personal life or some historical event, then you have captured the essence of this book (at no actual physical danger to yourself). If the real event happened, you would do whatever was necessary in order to reach your goal. That would be a great responsibility, but it would also provide for great adventure.