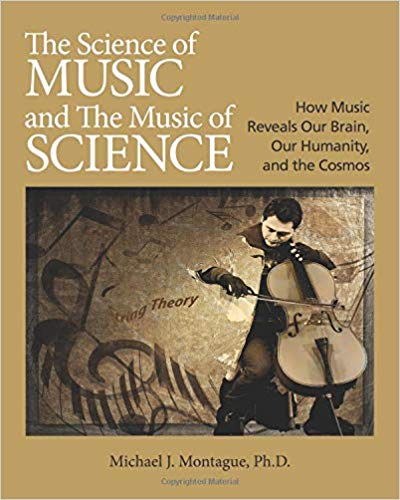 How Music Reveals our Brain, Our Humanity, and the Cosmos

The book starts with the basics: What is science? What is music? Without clear working definitions, insight is impossible. In other books that attempt to deal with these topics for the educated layperson, science is often defined inaccurately or incompletely and music is often defined vaguely, without rigor.

The book is not a thorough discussion of music theory, but rather an accessible, engaging overview of the necessary and fundamental elements of music (rhythm, sound, melody, harmony, the instruments of the orchestra). It describes how musicians and physicists investigate and describe these elements somewhat differently, but how we, as scientists and musicians, with our common humanity, always gain the most complete insight by working on them together.

Physicists, mathematicians, and cosmologists, long inspired by music, dating from the time of Pythagoras in the sixth century B.C.E., are leading us to the fundamental nature of reality. And reality itself seems to be musical. String theory attempts to combine the theories of special and general relativity, the standard model of elementary particles, and quantum mechanics to create a unified theory, an explanation, a Theory of Everything, for how Nature works at its most fundamental level. The equations of string theory are astonishingly similar to the equations and the concepts of music theory.

If string theory is “right,” in essence we are all cosmic music and this is indeed the Music of Science.

The Science of Music and The Music of Science : Michael J. Montague, PhD