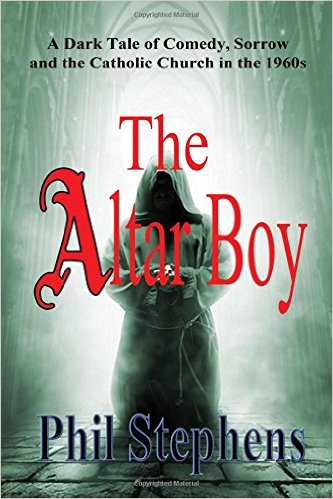 Black-robed nuns, priests, bishops, the select fraternity of Altar Boys, and the ancient ceremonies of the Catholic Church. Music of the ’60s, boyhood shenanigans, Cootie doctors, and coming of age. Set in the socially and politically tumultuous period of the 1960s, The Altar Boy is the fictionalized memoir of Carl Sanders, a funny, sensitive kid, who’s caught in the middle when his family is fractured by the intrusions of a priest. We follow Carl’s confusion and pain as he watches the pious façade of the Church fall away to reveal unholy carte blanche, cover-ups, and collusion.

The book opens in the late 1980s. Carl and his brother down beer after beer at a favorite pub, trying to piece together their family’s chaotic past. The stakes are high—someone is about to return after a 20-year absence, threatening to re-ignite the family conflict. As the brothers’ painful recollections of their past become more traumatic, Carl drifts back in time to the era he tried for so many years to forget.

The story is realistic, poignant, and at times very funny. Stephens shines a timely spotlight on the then-unquestioned power of the Church, while taking the reader back to the ’60s era of rock & roll, Catholic schools, social upheaval, and boyhood pranks.