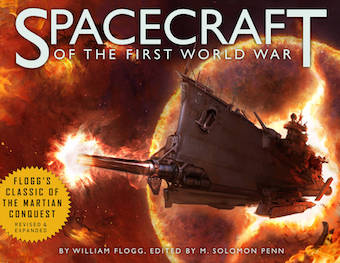 These are the fighting spacecraft of the war after the ‘War of the Worlds’.

Here, at last, is the comprehensive, full-color guide to the major spacecraft of the First World War. From humanity’s first flight into space in 1908 to the Icarus Event of 1929, the beginnings of our journey into space and the conflicts that were fought there have their story told.

As an identification manual, it covers the fifty major spacecraft classes that saw action in the conflict. America, Britain, France, Italy, Germany, and Russia are all included. Also covered are the strange vessels of the Neomartian Secession. Details are given of development and combat histories, as well as background information about the war they fought in, and the world they fought for. The mysteries and paradoxes of this first space war are also touched on.

So great was the rate of technological change and progress during this period that the vessels herein can be used as touchstones for the development of space travel itself. From iron to steel, and then to woven silicates the possibilities unveiled during the war set humanity on a cascade of technical development and discovery.

Here then, are the illustrated stories of the vessels of Earth’s empires, recalling times long vanished, but the origin of the arrow that points to the stars.