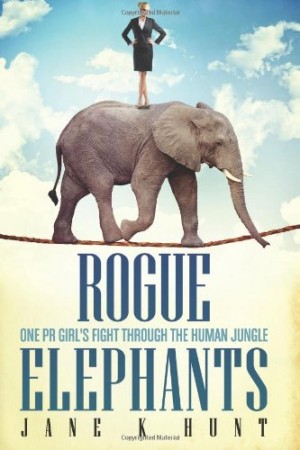 Rogue Elephants: One PR Girl’s Fight Through the Human Jungle

Rogue Elephants: One Girl’s Fight Through the Human Jungle is the witty and self-deprecating auto-biographical account of a PR career stretching from the mid-80s to 2012, written by Britain’s Chartered Institute of Public Relations’ winner of the title of ‘Best Freelance PR Practitioner’ 2012.

Filled with both humour and poignant episodes, the book takes the reader on a journey, beginning with Jane’s floundering around with a PhD at Cambridge University and then taking on the cultural challenges of working as the executive secretary for a Japanese stockbroker. It sees her launched into a career in in-house PR, before leaving the PR profession for a while to face huge personal challenges, from alopecia to death threats.

Her return to the industry and subsequent move to the agency side of the PR world is then sprinkled with funny episodes, bizarre encounters, famous faces and moments of public relations triumph, which will have both those in the PR profession and beyond laughing and wanting to read on, to find out how Jane then created a regional PR consultancy (Catapult PR), based in a sleepy Lancashire location which could create one award winning PR campaign after another.  The book ends with Jane’s ultimate title triumph in 2012, when she grabbed her award from the hands of Olympian, Colin Jackson and wasn’t prepared to let go!

This book is a must for anyone working in PR or considering a career in public relations, but is also a witty read for anyone who likes books in the spirit of ‘It Shouldn’t Happen to a Vet’, any woman trying to juggle motherhood with a career or running their own business and anyone who is seeking inspiration to overcome life’s obstacles.