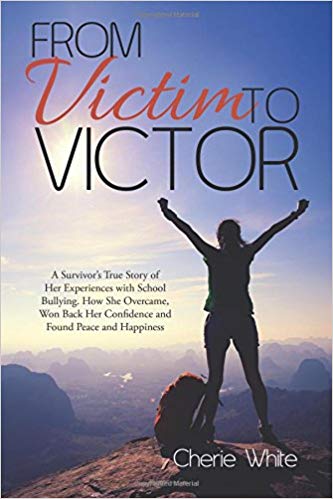 From Victim to Victor: A Survivor’s True Story of Her Experiences with School Bullying, How She Overcame, Won Back Her Confidence and Found Peace and Happiness

Geared toward the YA audience, “From Victim to Victor” is a brutally honest, chronological account of the torment suffered at the hands of my classmates and the lack of support received from bystanders, school staff and family during my last six years of school. It is also a record of how my harassers justified their behavior which allowed them to avoid detection and accountability, the blame I took for everything that was happening to me, and the cumulative affects it had on my self-esteem and personality.

I go on to tell of the downward spiral to an attempted suicide at age fourteen, the eventual school transfer and the final realization that the torment long suffered was no reflection on myself but on the twisted and narcissistic personalities of those whom chose to bully someone not originally from the small town.

The manuscript was woven from several old daily journals written as a teenager during that terrible time and had for years been put away. This story was very difficult to write, as it brought back a flood of painful memories.

This memoir was written not only for the therapeutic and cathartic benefits it provided, but also to provide encouragement for the millions of young people whom are bullied today. As you likely know, the statistics of young people being bullied and the suicide rates of these kids today is astronomical!

It is my hope that this book will help bullied and marginalized youth see their own value and the good they bring to this world, despite what others may tell them. It is also my goal that it will provoke them to think before deciding to end their lives and/or the lives of others. My intent in writing this piece is to be a living testimony to bullied victims everywhere that if they stick it out and go on living, life will get better…much better and they too can go on to live normal lives of success, peace and happiness.

From Victim to Victor : Cherie White