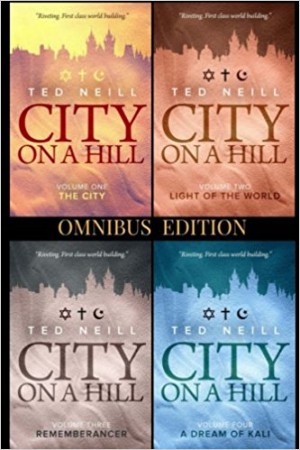 City on a Hill

Faith, religion, godliness—these things have caused more pain, suffering, and death than all the plagues of history combined. In Fortinbras, a city built in the aftermath of a religious war that nearly ended all life on the planet, religion is considered a disease. The residents are taught that they are all that is left of humanity and the cold law of logic and reason rule their lives. Sabrina Sabryia, a young police cadet, is a resolute enforcer of the law until her loyalties are torn between her best friend Lindsey Mehdina, a charismatic spiritual leader, and her uncle Angelo D’Agosta, the head administrator of the city.

The conflict drives Sabrina and Lindsey across a radioactive wasteland pursued by cyborg bounty hunters. They quickly learn that what they took for truth in Fortinbras was not all that it seemed. Meanwhile terrorists plot a religious uprising that threatens millions of innocent lives and Sabrina and Lindsey must choose sides. Their choice pits friendship against family, war against peace, and eventually, faith against doubt.

City on a Hill : Ted Neill