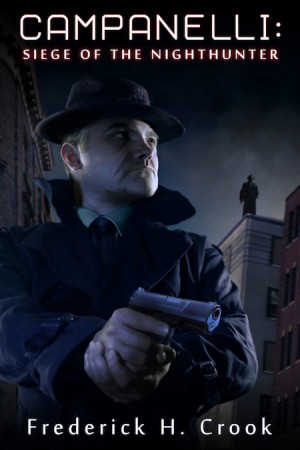 June, 2110. A serial killer strikes the populace of the City of Chicago. The first victim is a wanted man by Detective Frank Campanelli’s Sentinel Division. His body had been mutilated and, from the evidence uncovered by forensic genius, H. Lincoln Rothgery, it has been partially consumed. The unknown invader leaves a trail of corpses behind in short order, including that of a homicide detective.

To add to the mystery, the DNA evidence retrieved from a stolen vehicle indicates that the killer is former military, but special encoding prevents the murderer from being identified. Frank’s partner, Marcus Williams, seems to know more about what’s going on than he lets on, until the former Navy SEAL calls in a friend from the FBI to help.

“The Nighthunter”, as the media has labeled him, instills terror and virtually shuts down Chicago. Together, Campanelli, Williams, and the agent must work to capture the enigmatic and frighteningly efficient cannibal.