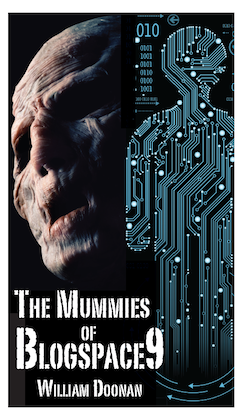 The Mummies of Blogspace9

It’s a taut, high-stakes thriller about a team of archaeologists who inadvertently dig up more than they bargained for. Demons of antiquity are not easily amused, nor are those who’ve sold their souls to protect them.

The Mummies of Blogspace9 will fill your heart with terror and with glee (but not at the same time, because that would be very strange, and also pointless).

You’ll laugh out loud, cringe in fear, and shake your head with delight. Here are some plot elements you might enjoy:

3) very attractive protagonists who you will develop crushes on;
4)carefully-chosen fonts;

“None of us knew what was at stake. And that’s the thing about archaeology – you never know what you’ll find when you start digging into an ancient pyramid. Maybe some burials, mummies even. But surely not a five hundred year-old secret worth killing for.

Had I known at the onset that seven weeks later most of my friends would be dead, I would have left Peru in a heartbeat. But of course I didn’t know that.

I didn’t know that a demonically-possessed Spanish Grand Inquisitor would haunt the crap out of us, or that a pair of undead conquistador knights would help us find the secret to putting down walking mummies.

And surely, I wouldn’t have just sat around had I known that something was watching from inside that pyramid, some malevolent force that could animate the dead.

But it’s all true, as you’ll come to realize.”

The Mummies of Blogspace9: Horror has a new URL.

The Mummies of Blogspace9 : William Doonan