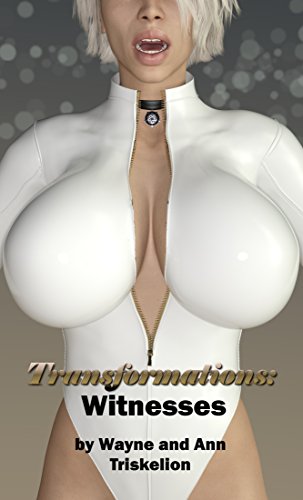 A religious cult has taken control of Cuba, turning it into a sexual playground. But, the Church of Morpheus has designs beyond the island. It plans world domination through sexual perversion. And the organization is growing…

Upstate New York is a world away from the goings-on in Cuba, but the Church of Morpheus is there. Three Jehovah’s Witnesses come to a remote farmhouse in the country. What they find there will change them forever.

“Transformations” is about a shadowy Church that has taken over the island of Cuba. The Church of Morpheus is bent on world domination through mind control and they are extending their influence throughout the world.

The Church seeks to divide humanity into castes and the stories involve the conflicts between the US government, the ruling Religious Caste, and the Whore and Professional Castes – conflicts in which all three sides see themselves as fighting on the side of right.

While the saga tells a story of intrigue and suspense, the stories themselves focus on individual characters and how they are swept up in this great conflict. From Jehovah’s Witnesses who knock on the wrong door (Transformations: Witnesses), to shoppers trapped in a mall at Christmas (Transformations: Visions of Sugar Plums), to a college student who takes part in an experiment that makes him a living god (Transformations: Morpheus) – the series explores mind control, bimbofication, polyamory, immortality, and the seduction of evil.

Maria Anastasia Marapova is over a hundred years old. Born in Soviet Russia, she was a hero of World War II. Now, one of the Whore Caste’s Perverters (White Witches), she bends people to her will, transforming them into her vision of seductive perfection. Immortal and beautiful, she is like ice chiseled into human form. But Britt Connors, the dynamo US District Attorney who faces her in court, melts the ‘White Witch’ with love and compassion, becoming not only her lover, but her conscience.

Dr. Mona Karnes is a brilliant geneticist and surgeon who is searching for her abducted aunt. The Church sets its sights on her brilliance and because of that, Mona suffers a great loss. Now a member of Professional Caste, Mona is torn between the world of sexual wonders she is helping to create and her hatred of the Religious Caste. She walks a tightrope, on the one hand furthering the work of the Church with her experiments while working against it in the background.

Angela Owens is a lonely UPS driver. One day she delivers parcels to a farmhouse in upstate New York which isn’t quite what it seems. What follows is a descent into eroticism as Angela’s personality is suppressed by Church hypnosis and she becomes Sugar, a twisted White Witch. Sugar’s life becomes an orgy of mind control and transformation. As time goes on, she finds that even as part of a polyamorous coven, a person can be lonely. Sugar searches for love in a world gone mad with lust, a constant fight between the urge to transform others, and the urge to do good.