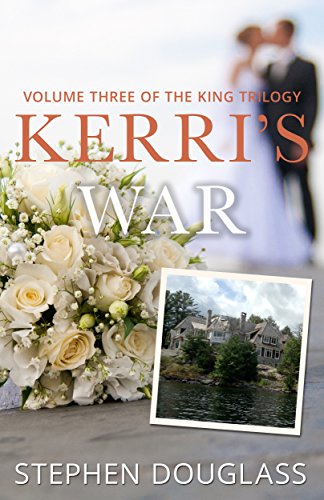 You are about to read Volume 3 of The King Trilogy, the story of a thirty-three year old woman who chose to go to war with the greed and avarice of big business, the overwhelming power of the U.S. Internal Revenue Service, and a billion dollar shareholder lawsuit against her. Simultaneously, she chose to fall in love with a man who was engaged to marry another woman.

Kerri King’s dedication and tireless work ethic had taken her to the top. She was the president and CEO of Iacardi & Sons, one of the largest and most successful commodity trading companies in the world. Everything was perfect, until the company was nearly decimated by the terrorist attacks on September 11, 2001. Tormented by the loss of all but three of the company’s New York employees, and driven to provide a source of income for the families and loved ones of the Iacardi employees who died on that terrible day, she begins the fight to rebuild the company.

Virtually all of the cards and circumstances are stacked against her. The company is broke. Charles and Mario Iacardi, the company’s founders and financial providers, are dead. Peter Tavaris, Walter Deaks, and Billie Dukes, the three surviving New York employees, are vehemently opposed to Kerri’s continuing leadership. Enerco, a gigantic Houston based energy trading company, conspires to purchase Iacardi & Sons, and employs every dirty trick in the corporate playbook to accomplish that objective. Desperate to salvage value for their Iacardi stock, the shareholders launch a billion dollar lawsuit against Kerri, and vote to have her removed as president. In her quest to provide financial relief to the estates of deceased Iacardi employees, Kerri choses to give away to the Iacardi estates every cent of the fortune accruing from her father’s tainted trust. Her decision triggers disastrous consequences doled out by the Internal Revenue Service.

Kerri’s troubles are not confined to the corporate world. Just when she thinks she has at last found the love of her life, she is horrified to receive an invitation to his wedding in Naples, Florida, on New Years Eve, December 31, 2001. The wedding is like no other she, or any of the invitees, have ever attended.