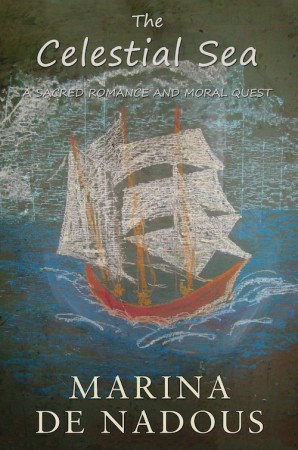 A glorious, exciting and heart-wrenching tale, ‘The Celestial Sea’ is the first book in a new series.

This is the story of an English housewife and mother and an artistic Kiwi man; musician, woodsman and teacher, who find themselves embracing life in the Southern Hemisphere in the most unexpected and extraordinary way. Plucked from the bosom of all she has ever known; she finds herself exploring the beautiful land of Aotearoa, New Zealand, in the company of a thrilling companion whose own settled, community life is challenged by her arrival.

Walking a fine line between blessing and disaster their creative liaison becomes a clandestine love affair of epic proportion, surprising them both with its spiritual truth. Dare they merge their growing affection into an everyday reality? Through the often hilarious adventures that make up their ‘ordinary’ routines they find themselves escaping to the tranquillity of their imaginary boat, ‘The Celestial Sea’; sailing for many months in uncharted waters and alighting upon shores of such passion and sensuality that they risk capsizing, causing an almighty scandal in the harbour.

‘The Celestial Sea’ culminates as the profundity of their connection leads to a tragic ending of thwarted love – but is it really the end…? Find out in the subsequent books planned for the series.