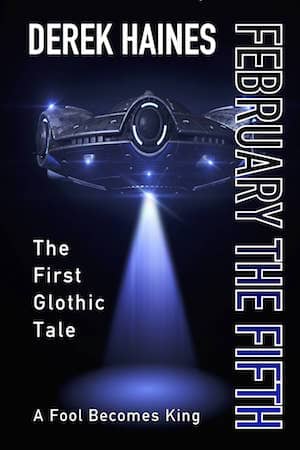 A young fool becomes king and quickly discovers he has some very nasty enemies. Particularly the ones who are shooting at him.

In a remarkable turn of events, a young man with a lot definitely not going for him, somehow manages to come to terms with a startling reality. He has to grow up.

Being handicapped by not only having rather nasty acne and an odd eye impediment, he also has to suffer the fact that his name is February. Or at best, Feb to his very limited number of friends.

While not at all wishing to rush into this startling new reality, circumstances and a few elbow nudges from his very protective elder sister ensure that his ‘not at all wishing’ turns out to be a complete waste of time.

Thrust totally and altogether unwillingly into a position of authority by early afternoon, February finds himself with a new appendage tacked on to the end his name.

The Fifth. The new and very authoritative part of his name.

Of course, as is the case in all such rapid and thrusting types of promotion to positions of power, there will be those who are not happy about it. In February’s case however, he finds that in fact these those amount to just about everyone apart from his three sisters.

Undaunted by this reality, Feb accepts his new responsibility and by early evening sets about getting himself into a real tangle.

His only true achievement being that he discovers that quite a few of these those who weren’t so happy, are in fact really very upset about the whole Fifth appendage deal.

By bedtime, he thinks he is in trouble.

Before lunchtime the next day, he is sure.

“February the fifth is like a song from Paul McCartney or a gag from Monty Python, it starts in one direction and leaves you in a totally different place, then you excepted. Love it!”

“Derek has a great sense of comic timing in this book and captures character extremely well. The twists and turns of the plot kept me reading right up to the last page. “

“In his hilarious novel ‘February The Fifth’ Derek Haines takes up where Douglas Adams left off by creating a totally dysfunctional society inhabited by people like Snurd Humped, Purt Stringly, Lefroy Overload and many more equally preposterous characters. Derek has created a very funny and extremely easy read.”